The owner of ALEXIS LAVIR is a Chicago native young woman named Alexis Lloyd. She’s 22 years old and is building an Empire for herself and family.

“ALEXIS LAVIR isn’t just a boutique, its a way of life! To be a LAVIR Girl is to be a woman of STYLE and GRACE” said Alexis. Her desire is for women who are sensual, but dress with class to be on the forefront of life.

Her passion is to also help women and younger girls growing up to avoid the pressures and insecurities that social media can have on women. Through each piece of clothing she sells, she wants to shed light on the fact that women can dress with sex appeal and class and still look beautiful.

You can find ALEXIS LAVIR on social media via IG/FB @alexislavir. Check out her at www.alexislavir.com . Sign up for the email listing to get exclusive deals and alerts when something new comes in! 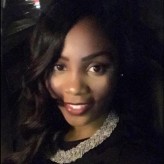 LOOK at Melissa Robinson of She is rooted